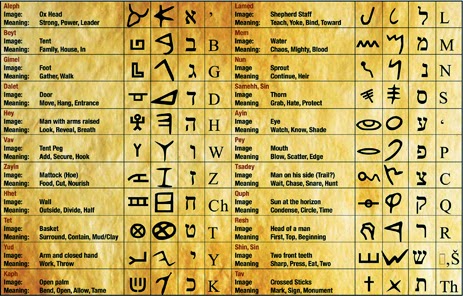 I have to admit that I have been bothered by the prospect that the Jewish People had at one time written their Torahs in one "font" only to have it be lost and then reintroduced by Ezra hundreds of years later.  If they couldn't be trusted to keep their alphabet straight, how could we believe that the "Mesora" (the chain of transmission of law) has been accurately conveyed?

Well, as of last night I thought that I had got myself a pretty good answer to it and then I came across a much better one.  So instead of recreating the wheel, I'll just cut and paste an excellent analysis from '02 that I found on the Aish Das website:

The Script of the Torah

The Gemara in Sanhedrin 21b-22a tells us what at first seems very surprising. However, after a careful reading and placing the events in an historical context they do not seem surprising at all.


Mar Zutra and some say Mar Ukva said: Originally the Torah was given to Israel in Ktav Ivri (paleo-Hebrew characters) and in the holy lanugage. It was given again to them in Ezra's time in Ktav Ashurit (Assyrian characters) and in Aramaic. Israel selected for themselves Ktav Ashurit and the Hebrew language... It was taught: Rebbe said: Torah was originally given to Israel in Ktav Ashurit. When they sinned it was changed to Roetz (Ktav Ivri). When they repented, Ktav Ashurit was reintroduced... R' Shimon ben Elazar said in the name of R' Eliezer ben Parta, who said in the name of R' Elazar Hamodai: This writing was never changed...

This passage raises a number of questions. How could Ezra change the script of the Torah? How could he change the Torah's language from Hebrew to Aramaic? Furthermore, if he found the authority to do so, how could the people determine an outcome against his decision? According to Rebbe, why would the script of the Torah change based on whether Israel sinned or repented?
R' Reuven Margoliyot (Margoliyot Hayam, Sanhedrin ad loc,; Hamikra Vehamesora, ch. 9) answers all of these questions with the following historical reflection. It is known that some ancient cultures had one script for sacred purposes and one for everyday use. For example, the Indians only used Sanskrit for religious purposes and not for the mundane. The talmudic sages mentioned in the above passage were debating the extent of this practice of having a script for only holy purposes in Israel. However, according to everyone this was the practice, similar to the talmudic dictum, "Something that is used for the sacred may not be used for the profane" (Avodah Zara 52a).

That the original tablets were given in Ktav Ashurit but not the second tablets can be seen hinted in a number of sources. For example, the Gemara in Pesachim 87b says "the tablets broke and the letters floated in the air". Exactly what it means that the letters floated in the air is unclear. However, on that same page the Gemara says, "Three things returned to their origin... the script of the tablets". That sounds like Ktav Ashurit being replaced with Ktav Ivri. Similarly, the Mechilta on Exodus 17:8 says that after the tablets were broken "the heavenly writing returned to its place". We perhaps also see evidence of the disappearance of Ktav Ashurit much later in history. The Tanchuma on Vayeshev 2 says, "What did they do [in response to the Samaritans]? Ezra, Zerubavel, and Yehoshua gathered the community to the sanctuary... and excommunicated the Samaritans with the sacred name of G-d, with the script that was written on the tablets, with the decree of the heavenly court,..." The use of the "script that was written on the tablets" is important for two reasons. First, it seems that this script was unique. Furthermore, we know from the Gemara in Sanhedrin and from other historical sources that the Samaritans used Ktav Ivri. The contrast between the Samaritans and the "script that was written on the tablets" implies that this script was not Ktav Ivri. We thus see that there is ample material supporting the Radbaz's claim that the first tablets were in Ktav Ashurit.

Recall that Mar Zutra said that the Torah was given to Israel in Ktav Ivri. The Ritva deduced from this that the special Torah of Moshe that was kept in the ark and later in the Temple was in Ktav Ashurit. Only Torahs for the people were in Ktav Ivri. The ability to read Ktav Ashurit was maintained by priests and scribes, which is why King Yoshiyahu needed a priest to read to him from Moshe's Torah when it was found in the Temple (2 Kings 22:8-11; Abarbanel). The king had never before seen Ktav Ashurit and his reaction to seeing it fo the first time, and in the Torah scroll that Moshe himself had written, demonstrates the deep religious emotion it evoked. We perhaps find hints of this in Isaiah 8:1 where the prophet is commanded, "Take a large tablet and write on it in common characters". This is must have been referring to Ktav Ivri that was used by the common people (see Rashi). Ktav Ivri had gained such prominence that the existence of ending letters (ךףץןם) was forgotten by the masses and had to be restored (Megillah 2b-3a).

However, Ktav Ashurit was still studied by the priests and scribes, of which Ezra was both. When he saw that Ktav Ashurit was so forgotten that, when it was written on the wall of King Belshatzar of Babylonia, only Daniel could read it (Daniel 5) he realized that it must be reintroduced to the people. Yet, he still had the dilemma that people would then be writing Hebrew in the holy Ktav Ashurit for improper purposes. His solution was to translate the Torah into Aramaic and introduce the Aramaic Torah in Ktav Ashurit into common usage. That way people would become familiar with Ktav Ashurit without using it in their daily Hebrew writing. This is what is meant in Nehemiah 8:8, "So they read from the book, from the law of God, with interpretation." It was interpreted by translation into Aramaic (Megillah 3a). (This translation was later recreated by Onkelos). However, the people had lived their whole lives with a Hebrew Torah and were not ready to change the language of their holiest of books. Therefore, they decided to retain a Hebrew Torah in Ktav Ashurit but conduct their daily business in Aramaic. This would produce the results that Ezra desired because Ktav Ashurit in Hebrew would not be a part of the daily routine.

Rebbe agreed with this historical reconstruction but attributed the original transition from Ktav Ashurit to Ktav Ivri to the idolatrous era of the First Temple rather than the episode of the Golden Calf. According to Rebbe, it is even more plausible that the scholars always retained knowledge of Ktav Ashurit. It was only the masses who were busy with their daily lives and/or idolatrous ways who forgot Ktav Ashurit when the Torahs were changed to Ktav Ivri.

R' Elazar Hamodai does not necessarily disagree that people forgot Ktav Ashurit. He only argued that the Torahs were never changed from one script into another. However, he agreed that people had forgotten Ktav Ashurit, the script used only for sacred purposes, and that Ezra had to re-educate the masses in the holy script (see Teshuvot HaRambam, ed. Blau no. 268).

We have seen that many questions can be raised about the validity of our Torahs. However, Judaism, like any other serious thought system, is complex. While by necessity we were taught simplicites in our childhood, we need to sieze all available opportunities to broaden our perspectives and deepen our faiths. Rather than using questions as reasons to reject traditional Judaism, we must use them as opportunities for intellectual and religious growth.